Why You Should Stand For General Council! 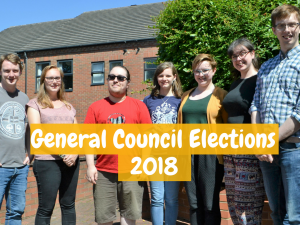 "My time on General Council has helped me grow personally and professionally, and given me the opportunity to take a lead on the direction of SCM. One of the things I love most about SCM is that we are not an organisation or an institution – we are a movement, a collective of students who make decisions together about what we offer and how we can support each other in our faith. The best thing has been the chance to work with such a fun and inspiring team of people. I would thoroughly recommend anyone to stand for General Council."
- Emma Temple, Campaigns Portfolio Holder and Trustee
The General Council is the beating heart of SCM; it is where decisions are made, plans are discussed and ideas come to life. Being on GC gives you the opportunity to shape the movement to which you belong while learning new skills; charity governance, events planning, editing and publishing Movement magazine to name but a few.  If you have a passion for the work of SCM; if you belong to an under-represented group; if you want to be part of a team who coordinates our movement, then being on GC is for you! This is an exciting time to be part of SCM, we are a growing movement, but as a movement led by students we need you (students) to take the lead. Want to help steer the movement to which you belong? Then join GC!
​- Ross Jesmont, Convenor of General Council and Trustee
"One of the reasons I stood to be a trustee and portfolio holder was because there wasn’t a specific role on GC that centred on LGBTQI+ issues, and I felt that there should be. I’ve been the LGBTQI+ Representative for almost two years now, a role where I’ve had a lot of freedom to focus on the issues that really matter to me and other LGBTQI+ people within SCM. This freedom to choose and create your area of focus means that you can bring something to SCM that you really care about and that you are best suited for. If you want to work for justice and build community, running for General Council is a supportive and valuable way to do so."
- Caitlin Wakefield, LGBT+ Representative and Trustee
"In the two years in which I have served on GC and as a Trustee I have had so many opportunities to do things which I would not otherwise have been able to do. For me one of the best things about being on GC has been serving as a part of the editorial team creating Movement magazine. One of the best things about being on the team was having the opportunity to conduct an interview with Ruth Valerio for the website. Being on GC has also given me the opportunity to learn about how to handle staffing and financial matters – basically how to keep SCM running as a charity."
- Gemma King, Media and Publications Portfolio Holder and Trustee

All SCM members are eligible to stand for General Council. Nominations close at 12pm on 23rd February – click here for more details about standing and applying!

Tags:
General Council
< Back to all blogs

Rach’s Reflection: One Last Time
Exile As Opportunity: The Fringes and Hidden Corners of the Church
Black Grief