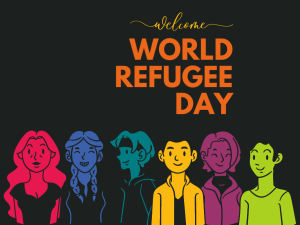 World Refugee Day comes around every year on the 20th June, June being World Refugee Awareness Month. Last year SCM began a long-term campaign focusing on the rights of Refugees and how the UK’s Nationality and Borders Bill would affect their access to safe travel as well as the right for their lives to be saved if travelling unlawfully into the country by boat.

In chapter 19 of Leviticus, verse 18, it states for the first time in the Bible that “you shall love your neighbour as yourself” (NRSV). Sixteen verses later this statement is repeated but revised: “you shall love the alien as yourself” (Leviticus 19:34). Though the noun ‘alien’ appears insensitive to us now, translationally, it wasn’t intended by the writers to be. Verse 34 shifts the focus from literal neighbourly love to nationless philia (friendship and affection). It declares that nationality should be not considered a dividing force nor a reason for conflict or dislike.

As demonstrated in the story of The Good Samaritan, your neighbour can be a family member or spouse, yet they can also be someone who upsets you or who you are suspicious of or reluctant to engage with. This is similarly shown in Matthew 25…

The Judgement of All Nations

First, I’d like to reiterate something I wrote for the SCM website back in October 2021. For context, I was writing about the Nationality and Borders Bill alongside the UK’s direct contribution to the DSEi Arms Fair in London:

“to seek justice is to put into question the ethics of selling deadly weapons to recognised human rights abusers; it is to push our own government to acknowledge that the arms they sell are used in the destruction of people’s homes, cities, and bodies. Seeking justice is to challenge the legal implantation of immorality by criminalising rescue missions for those crossing the border by boat. It is to disrupt the blissful unawareness of those who do not realise that we, as a country, fill the pockets of the wealthiest individuals with the rubble of other people’s homes, and the souls buried beneath them or lost in the waters on their way to the same country that distributed their destruction for cash.”

For me, this quote encapsulates the absurd immorality of the system. While tightening immigration laws might be an understandable policy, though not necessarily one we all agree with, the cruelty with which our government has chosen to achieve this is shameful. The chalk outlines of drowned bodies are being drawn on our shores precisely because the muses from which they are created might never reach this ground; the law has changed to make it so.

Unlike this quote from October, the Parable of the Sheep and the Goats (Matthew 25:31-46) is not directed towards individuals or leaders. In fact, another common title for this parable is The Judgement of All Nations; not just one nation, nor one person or peoples. Matthew 25 calls for the participation of everyone in the maintaining and improvement of the safety and wellbeing of the stranger as well as our neighbour. We are obliged as the flocks of God to feed the hungry, clothe the cold and greet the strangers on our shores with warmth regardless of our individual opinions regarding their situation. “I was hungry and you gave me food, I was thirsty and you gave me something to drink, I was a stranger and you welcomed me”, Christ exclaims (Matthew 25:35). There is nothing to interpret here.

For this World Refugee Awareness Month, take a moment to look to yourself. Consider if you have ever played a role in the degradation of refugees’ rights or liberties and, equally, if you have ever done anything to improve them. With the Nationality and Borders Bill inked into the walls of Parliament as of 28th April 2022, words of disdain for it are not enough. We at SCM know this too. Talking about food poverty will not change it, buying new clothes will not robe the homeless and the refugees who are lucky enough to enter the UK safely will not know the grip of open arms if you do not go to greet them. Jesus explains that just as you failed to show kindness to the “least” in society, “you did not do it to me” (Matthew 25:45). Everyone in this world has more in common than they dare admit. When it comes to changing the world for the neighbour and the stranger alike, actions speak louder than words.

Campaigning is a brilliant way of developing your personal understanding of social issues within the country you live and/or elsewhere. It’s an even better way to make some noise, some ruckus, by organising silent vigils, protesting in the streets, handing out fliers, signing petitions, writing to politicians, boycotting companies - spreading the word!

However, in order to protest for the rights of others, it is extremely important that people feel not only comfortable with the concept and set up of social action but feel mentally supported and emotionally prepared to do so. Faith is action; however, a huge part of action is awareness and self-discovery.

For any of our members coming to the National Gathering this year (8th-10th July), SCM staff will be running a range of workshops on everything from craftivism to communion bread making. We hope that these will help to bring you as individuals and a collective closer to social action in a way that is comfortable and grounded in your values and boundaries.