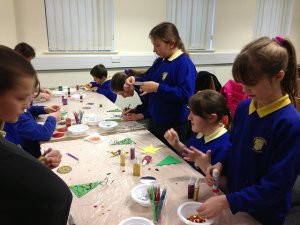 I find many alarming signs of increased militarisation in our culture. There has been discussion elsewhere about military recruitment at secondary schools, but I am also bothered about how our “Help for Heroes” and “Armed Forces Day”( introduced as “Veterans Day” in 2006) have been used as a means of legitimising and glorifying military interventions. Into this context, I would slot the way in which primary school children are taught about war and the centrality of World War II in the curriculum.

Primary school age children are at a very impressionable stage in their development as human beings and in their understanding of reality. What goes into the history curriculum feeds into their process of making sense of the world. It bridges the gap between story and reality and it does not do so in a moral vacuum. Children are still learning about what history is when they “do” the Second World War. They have been told a story, a very special story because it’s Actually True, but what do they do with this information? It is ridiculous not to expect them to process it, not least because it asks the question “If that really happened then, am I safe now?” In order to make children feel safe, they are fed a sanitised version of a very unusual war, a clear moral story with a happy ending.

What primary school children learn about the Second World War is roughly this: There was a war in the middle of the last century, when our great grandparents were young. We were at war with Germany who were doing bad things because they were led by a bad man called Adolph Hitler. Children had to carry gas masks and be evacuated and some people were killed by bombs. Lots of people went off to fight and some of them were killed or wounded. Winston Churchill was a great leader. He had said how bad Hitler was before but nobody believed him, but then he became Prime Minister and we won in the end.

So what does this teach children about what war is about? It teaches them that war is what you have to do when people in other countries are doing bad things. The sanitised version of the History of World War II spares children the unnecessary complications of Bomber Command’s “Total War”, of Stalin’s genocides, Churchill’s part in the starvation of millions of Indians, the horrors of Hiroshima and Nagasaki and the war’s legacy with half of Europe submitting to the totalitarianism of the Warsaw Pact. Children hear of the experiences of British people who were alive during the war. They don’t hear of the experiences of people who were invaded, defeated or forced into compromise.

For pacifists, dealing with the question of “What would you have done about Hitler?” is as regular occurrence as Christians dealing with the question of “If there is a God, why is there so much suffering in the world?” Many Quakers actually did fight in that war because though they espoused peace, they believed that there was no other way to restore peace at that stage but to fight. It was for them an exceptional war. The problem now is that this exceptional war is the first one British children learn about, as if it were typical of any war. And even then, they only learn some of it.

Tags:
Peace
Education
< Back to all blogs