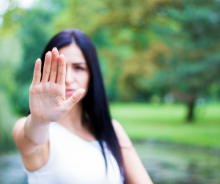 This icebreaker is designed to get people comfortable with talking about resistance. Often the term resistance is associated with warfare, violence, or discord, so it’s important to examine what the term means, particularly in a Christian context. Begin by passing a box of sweets around (or other food) and as people take sweets ask them to introduce themselves (if appropriate) and to very briefly share what resistance means to them. Would any of them consider themselves to have taken part in an act of resistance? Once everyone has shared, you might like to further the discussion by asking if anyone can think of examples of resistance efforts in history.

This part of the workshop discusses the legitimacy of resistance. Christians sometimes use Jesus’ teaching on non-violence and texts like Romans 13 to encourage inaction in the face of oppression. Other Christians use verses like Acts 5:29 to justify resistance against otherwise lawfully constituted authorities. Debates of this sort have divided Christians for millennia. Yet, the essence of Jesus’ teaching on non-violence isn't an appraisal of passivity. Often, allowing the status-quo to continue unchallenged is inherently a form of practical violent activity. You might like to consider the following questions with your group. Does the Christian faith encourage resistance against injustice? If there are valid reasons for resistance, what kind of a stand should be taken? How far should we be willing to take resistance?

The Bible is full of examples of creative resistance against both states and individuals who stand in the way of God’s works. Peter, for example, was thrown in jail by the state for preaching the Gospel. In the Old Testament, Rahab lied to her government to protect Israelite spies. Rahab broke ranks with the status-quo because her ultimate allegiance lied with another Kingdom. This Kingdom, the true centre of authority, includes a duty and preference for the orphans, the poor, and the downtrodden. Since the time of Jesus, many Christians have felt themselves called to action and resistance in the face of injustice. Two important examples are Dietrich Bonhoeffer and Sojourner Truth. Hand out the extracts below and reflect on the following questions with your group. What stands out to you in these stories? Why were these individuals called to resistance? How did they express their Christian call to resistance? What can we learn from them?

Dietrich Bonhoeffer was a pastor and theologian in Germany in the early 20th Century. From the start of Hitler’s rise to power, he was vocal against the Nazi party and the oppressive ideologies they stood for. After the outbreak of the second world war, he had the opportunity to leave Germany for America, which he did for a short while, before heading back to be in Germany in solidarity with his community there. Through his brother in law, he became involved with a plot to assassinate Hitler, and used his connections with the church in England to the advantage of the group of resistors. He was eventually caught and imprisoned, and was hung for treason against the state two weeks before the end of the war. Throughout his turbulent life he wrote about the theology of community, ethics, and discipleship, and despite struggling with the morality of plotting to kill a fellow human being, never lost his powerful and obedient faith. Even from prison, he wrote of his Christian commitment to loving his neighbour: ‘Mere waiting and looking on is not Christian behaviour. Christians are called to compassion and to action.’

Sojourner Truth was born Isabella Baumfree in New York 1797. She came from a Ghanaian slave family, and was sold away aged nine to another slave owner. When she fell in love with a neighbour’s slave, he was beaten to death, and in 1826, she escaped with her infant daughter to find work as a servant. Belle regularly went out into the countryside to pray to her mother’s ‘God in the Sky’. She had never been taught a religion, but in 1828, she had a transcendent religious experience, where she realised that God was not up in the sky, but an all-powerful, all-pervading spirit. She felt unworthy in the face of this power, until she had a vision of Jesus praying beside her and speaking on her behalf to God. After this she learned about Christianity, changed her name to Sojourner Truth, and became a preacher and activist. She spoke at radical gatherings, including the first National Women’s Rights Conference in 1850. She took direct action against segregation in Washington, and spoke against the death penalty in favour of prison reform. She also spoke out against misogyny in the church, proclaiming ‘Where did your Christ come from? God and a woman!’

Bonhoeffer, felt compelled to take direct action against injustice - he was obedient to the call and was willing to incur the consequences associated with his actions because God's law is over every human order. Bonhoeffer understood his actions and autonomy in relation to a revealed divine will, the purposes of God. Nonetheless, discerning the validity of his call before God was not easy. It involved taking time out to reflect and discern the nature of the calling and what course of action God wanted him to take. We face a similar challenge today when discerning what God is calling us resist: as Bonhoeffer puts it, 'the will of God may lie very deeply concealed beneath a great number of available possibilities.' You might like to consider the following questions. Does God call us to resist injustice and if so how do we discern God's call to resistance? What do we think are legitimate grounds for resistance? Should our response be proportional to our certainty?

Part of being a Christian is wrestling with the practical implications of our faith. If we are called to resist injustice, what are the tools and strategies that can help us fight unjust structures? Are there any strategies that work particularly well within the context of the student movement? Ask your group to split off into pairs or three's and reflect on these questions. You might like to provide the following examples to stimulate discussion.

Using our privilege: Bonhoeffer, for example, was well off, and used the gifts he’d been given such as wealth, time for prayer, education, connections for the good of the cause.

Making connections: we need to be finding common ground with those we may not always see eye to eye with, both as an act of resistance in itself, and to strengthen our efforts to tackle injustice where we see it.

After a time of discussion ask the groups to feedback to the wider group.

Close the session by praying for Christians who are actively answering the call to fight against oppression. You might also like to pray for individuals and their callings to resist injustice. You could ask someone to pray, or here is a short prayer you could read:

O God, we pray for all those in our world who are suffering from injustice: because of their race, colour, or religion; for those imprisoned for working for the relief of oppression; for those who are hounded for speaking the inconvenient truth; for those tempted to violence as a cry against overwhelming hardship; for those deprived of reasonable health and education; for those suffering from hunger and famine; for those too weak to help themselves and who have no one else to help them; for the unemployed who cry out for work but do not find it.

We pray for anyone of our acquaintance who is personally affected by injustice. Forgive us, Lord, if we unwittingly share in the conditions or in a system that perpetuates injustice. Show us how we can serve your children and make your love practical by washing their feet.