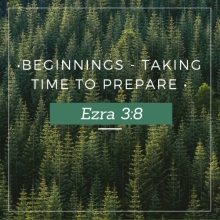 In the second month of the second year after their arrival at the house of God in Jerusalem, Zerubbabel son of Shealtiel, Joshua son of Jozadak and the rest of the people (the priests and the Levites and all who had returned from the captivity to Jerusalem) began the work. They appointed Levites twenty years old and older to supervise the building of the house of the Lord. Ezra 3:9

Have you ever been so keen to start a new project that you've plunged straight in without reading the instructions? I certainly have and it hasn't generally been the best way to achieve what I was hoping for. It happens. A bit of preparation and reflection wouldn't have gone amiss but at the time it seemed so important to get stuck in.

The Book of Ezra tells of the time when the people of Israel were allowed to go back to their homeland following their exile in Babylon. Rebuilding the Temple in Jerusalem was a priority but we learn from Ezra 3 that the work only began in the second year after their return. They needed time to make plans and to gather resources. More importantly, their preparation also included a focus on their traditions of worship.

The beginning of the new academic year offers a huge raft of possibilities; new clubs and societies, new tutors and projects, new social venues and new friends, and they all demand attention instantly. It can be difficult to hold the examples of Zerubbabel and Jeshua in mind but we might remember that they didn't even begin the work of restoring the temple without first making preparations.

Before beginning a new venture reflect:

Keep the answers in mind in preparing for the beginning.

O Lord our God, be with us in all our new beginnings.
Fill us with enthusiasm but guard us from rash decisions.
Support and guide us in all our preparations that we may bring all our projects to their best completion as gifts for your glory.
Amen