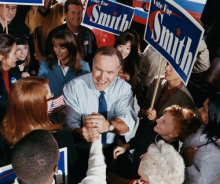 Make sure the room is arranged in such a way that you can imagine a continuum line existing down the middle of the room. At one end is the option ‘strongly agree’ and at the other end is the option ‘strongly disagree’. Ask your group to respond to statements by taking a stand physically somewhere along the continuum. After each statement invite one or two people to share their name with the group and why they have placed themselves where they are. Consider giving cake/sweets to those who share with the group!

The Christian church has nearly always articulated a tradition of involvement in politics. In traditional thought, the church is the source of all earthly, and therefore, political authority. This manifests as the Church exercising significant influence on the political and social order. In contrast, some Christians believe that Church and politics should be sharply distinguished. Luther, for example, understood the relationship between church and state as primarily the relationship between two non-overlapping domains, two kingdoms. Ask the group to consider the following questions. What is the proper function of government, whose ends should it serve? Do Christians have a responsibility to be involved in politics? To what extent: should there be some separation between Church and State?

Read the following extracts and invite your group to discuss Jesus’ involvement in politics. Was Jesus political? If Jesus was willing to challenge the unfair political structures of his day, should we do likewise?

“Religion as a separate sphere is simply not attested in our sources for the time of Jesus, nor is such a separation evident in the Gospel sources for Jesus. The Lord’s Prayer, for example, is inseparably political and economic as well as religious: Jesus teaches people to pray for the direct rule (kingdom) of God and for sufficient bread and for the cancellation of debts.”

“Because Jesús chose solidarity with the poor, I have a God who understands not just my privation, but the poverty of all who are excluded from the earth’s abundance. The radicalness of Jesús’ poverty is that he chooses to side with the poor, giving the Gospel message a political and economic edge.”

While the Bible doesn’t speak of politics in our modern democratic sense, it is evident that Jesus was a radically political agent of social change. He was even executed under the charge that he claimed undue political authority! During his earthly life, Jesus did not hesitate to challenge the political leaders of his day. When Jesus announced the new coming Kingdom, he announced a new form of government - one ruled by God and based on Kingdom ethics.

“When the righteous are in authority, the people rejoice; but when the wicked beareth rule, the people mourn.” Proverbs 29:2

“Blessed are the poor in spirit, for theirs is the kingdom of heaven.” Matthew 5:3-12

“It is easier for a camel to go through the eye of a needle than for a rich person to enter the kingdom of God.” Mark 10:25

“To fight for a just world where there will be no oppression or slavery or forced work will be a sign of the coming of the kingdom. Kingdom and social injustice are incompatible”

Ask each pair to briefly feedback on their discussions. Next it is important to consider how Christians can pursue this Kingdom. Use the following reflections to engage your group in discussion. To live in the Kingdom of God is to witness the reality of Kingdom values. But is it possible for Christians to take care of the poor and the sick without getting involved in politics? There are many things that we can do outside of government, but is it the case that some forms of sin and oppression can only be tackled at a national level? Jesus not only proclaimed the Kingdom, but he also lived it: is politics a practical way of realising Kingdom values?

In Mark, Jesus compares the Kingdom of God to a mustard seed: it starts from small beginnings but when full grown it will be tall and strong. As students, it may feel like we are powerless to bring about real change, but this is not the case! Ask your group to reflect on these questions in groups of 3 or 4. What actions can we take as Christians, personally and collectively, to be salt and light in the world of politics? Should we vote in national and local elections? Should Christians run to be members of parliament or local councillors? Should we participate in decision-making? How can students exemplify the Kingdom of God in student politics? At the end invite each group to share their answers.

Close the session by praying for greater Christian engagement in local and national politics or pray for wisdom for Christian MPs.  You could ask someone to pray, or here is a short prayer you could read:

Gracious and loving God, we give you thanks for all of your dedicated children that serve in the world of politics. We ask that you use their skills and talents to further your Kingdom in this world. Give them discernment, wisdom, and empathy. Put wise counsellors around them. Begin through them acts of courage compassion which pursue your higher vision. Amen.