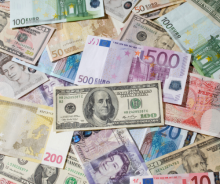 The goal of this workshop is to encourage attendees to become aware of their spending habits, their use of money, and the extent to which it affects others. The workshop is presented as a toolkit, giving you material and suggestions for running this with your own group. It can be as high- or low-tech as you want it to be or need it to be. If you've got OHPs, PowerPoint, or other resources, these can be helpful, but they're not necessary to run the workshop.

The idea here is to make people think about how much they know about brands, and how ubiquitous branding is.

What follows is a series of slogans for various brands. The idea is, you read out the slogan or display it on an OHP or flip-chart, and the person or people you're asking tells you what the brand is.

Feel free to add any other slogans you can think of to the list.

Because you're worth it. (L'Oreal) Just Do It. (Nike) I'm loving it. (McDonalds) Because every little helps. (Sainsbury's) I bet he drinks... (Carling Black Label) Probably the best lager in the world. (Carlsberg) Dare For More (Pepsi) Once you pop, you can't stop. (Pringles. Incidentally, that's actually because they put crack in them. No, really, it is.)

If you decide to do it as a quiz, have a small prize ready for the winner. If it's a fair trade item, that'd be nice.

Most people should do quite well – and the point of this exercise is just that. Few of us in our culture have managed to get by without knowing brands. It's part of our world – from Starbucks  to Sainsbury's, from Pringles to Pepsi, from Netflix to Barbie. Branding has even been adopted by charities and religious groups. Alpha is a brand, for example. So is Left Behind (with films, kids' versions and comic books as part of the growing franchise). Ironically, even the Fair Trade movement has a brand identity.

If they're savvy, they might pre-empt you and start talking about sweatshops and clustering and stuff, which is good, but only as long as everyone knows what they're talking about. If they bring these things up, make sure that everyone does have a vague idea of what they're getting at. Whatever you do, don't try to rail road the discussion. If they're already aware of the issues, it's pointless to try to be didactic.

Brands aren't about the product, they're about something more. Brands present themselves as a surrogate for identity and as a means of presenting an image to the world at large. The sad thing is, no matter how aspirational the image, no matter how memorable the slogan or hip the logo, brands exist in order to make money for those who hold them.

The goal of all business is to make money. Since the 80s, it's been the philosophy of most businesses that the only responsibility any business has is to its shareholders. The effect of this is that ethics and the responsibility of the individual to society at large is placed secondary to the simple pursuit of profit.

As Christians, we believe that in the same way that individuals hold a greater responsibility to society, so do businesses. But it's not the case.

Hopefully, there should be a Bible handy.

Referring to various Bible principles, this bit is designed to encourage your group to think about why a Christian shouldn't be prepared to countenance this kind of thing. Again, you can present the Bible quotes any way you want. This might be a good time to get people from your group to read out bits, either from Bibles, or from cards you've prepared earlier.

Some Bible verses: Christianity is political and it is important to see that Christ Himself was passionate about justice and equality, as much as he was about saving souls.

Isaiah 61: 1-2: Start with this passage. In the Gospel of Luke, this is the passage that Jesus reads out in the synagogue at the start of his ministry.

Crib notes: Most theologians reckon that the Isaiah passage is about the practice of the Jubilee year (Leviticus 25), where, in early Jewish society, once every fifty years, all slaves should be freed, all debts cancelled and all land should be given back to its original owners and allowed to remain fallow. It was intended to put things back to the point when the Israelites first took Israel, when everyone was free, no one was living in poverty, and everyone had enough land. By declaring, as the story goes, that He was the new Jubilee, Jesus declared an intention to make His own kingdom of heaven a just kingdom where everyone was free and equal and everyone had a chance to work a prosperous bit of land.

If we are in any way followers of Jesus, we're bound to do our best to work towards the values of the kingdom, Jubilee values, where everyone gets an even break.

This is good news to the poor, and not particularly good news for the rich.

If someone presents the opinion that we're saved by grace alone and that this sounds suspiciously like a ‘Gospel of Works’, you want to point out that even if you have a theology in which you're saved by grace, you have to accept that we are commanded to behave in this way by Jesus Himself, and while it may not be the thing that saves us, we believe that it's a non- negotiable part of the Christian witness since it says so in that big book that some of us have, you know the one, we read it in church sometimes...

Acts 2: 42-47; 4:32-5:11: The model of Christian community is represented in the first of these two passages, with a dark flip-side in the second. Ask your group about what we can draw about our attitude to our possessions, and our ethics and intentions when using them.

Crib notes: The story of Ananias and Sapphira is not a popular one, with its old-fashioned ‘smite first, ask questions later’ attitude more suited to an Old Testament narrative. But ultimately, whether or not you believe in a God who kills people for lying, the point of the story is this: the Christian faith is no place for self-interest or duplicity. If we're to be a prophetic faith community, we, as Christians, must treat our possessions as a common treasury for all, and be plain and honest in all of our dealings.

One American televangelist, some years ago, apprently blamed the failure of the church in Jerusalem on their ‘failure to understand God's free-market principles’ (ie. they screwed up because they weren't capitalist). This view might come up, but frankly, if you've read more than about three chapters of the rest of the Bible, you should be able to treat this view with the contempt it deserves.

This is where you encourage people to talk about what this all means. If you've got a flip chart, or an OHP with pens, this might be a good time to use them, so you can write down suggestions.

Essentially, here's where you encourage your group to offer suggestions about what to do about what we've talked about before. Can we do anything?

Here's a few suggestions that might come up (or which, if your group is stumped, you can draw into the discussion).

Campaigning We need to raise awareness of these issues among our church groups and our friends. We need to be active. It's probably best to pick a cause and stick with it... but there are plenty of causes out there.

Ethical consumerism This is a double-edged sword. On the one hand, there's boycotting products made by the unethical, and on the other, there's shopping for ethical alternatives. You'll never be able to boycott everything, but over the last ten years, it's been proven that large companies do cave in to consumer pressure, while others follow suit. Like the campaigns: stick to one or two. Ethical alternatives are available for most things these days; it's just a question of knowing where to find them. Make an effort to find those fairly traded alternatives.

Jamming You know, defacing billboards and appropriating slogans. We don't recommend you do this, since it is very often illegal, although we do applaud the example of one Calvin Butts, a church minister who took it upon himself and his congregation to whitewash out billboards for alcoholic drinks and cigarettes which were targeted at the people of his own deprived area of Harlem, New York (Naomi Klein tells his story in her book No Logo).

Wrap up with the main points of the workshop and take questions. You might also like to close the session in prayer.