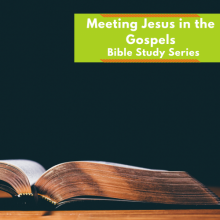 Come Holy Spirit of God, open my heart to receive God’s word to me today. Show me God’s heart. Let me see your glory. Amen.

So far, the story in Mark’s Gospel has centred on a developing clash between Jesus and the religious authorities. As far back as Mark 1.24-28, he was being proclaimed as having an authority beyond theirs. By 3.6 they were plotting to kill him. When he is interrogated by the High Priest (Mark 14.61-64), Jesus sets up a challenge: “I am [the Messiah the son of the Blessed one] and you will see…!” So when is it going to happen? When will we see whether God is with the High Priest or with Jesus? Jesus’ parables are stories with the wrong endings, stories with surprising twists. Now we find that the whole story of Jesus also appears to have the wrong ending. Jesus has set up the confrontation with the High Priest and now … well, he’s lost. He’s died.

However, it is at this moment that the Roman soldier who has been responsible for killing him proclaims that he was ‘God’s Son’. The true impact of this only emerges when we notice that this is the first time in the whole Gospel when a human being had called Jesus ‘God’s Son’. We have been told it at the beginning, and the demons have tried to announce it. We know that it is Jesus’ true identity, for God has directly confirmed it twice from heaven. Yet it has remained outside of human understanding until now - until his death.

In a sense we knew this already. When Peter proclaimed that Jesus was the Messiah, Jesus immediately ‘corrected’ this with talk of his death (8.29-31). Expressions of his identity that were not based on his death were lacking. Dying was not something that Jesus did, but was in fact central to who he was.

Vindication, however, will come. We see a foretaste of it with the tearing of the temple curtain. Often this is seen as representing the opening of access to God, but within Mark’s Gospel, we are on safer ground to see this as a divine sign that, in the confrontation between High Priest/Temple and Jesus, (and despite appearances), God is on Jesus’ side. Jesus will be vindicated and the whole temple will be destroyed (as Jesus had said in Mark 13.2). In Daniel ch. 7, the ‘one like a son of man’ in the end does receive authority, glory, power, worship and an everlasting kingdom. But that is to rush ahead. For now, we must face the truth that Jesus’ identity may be only fully revealed in his death.

So often we want to keep Jesus’ suffering and death ‘in a box’. We know that it happened, and may rejoice at the salvation it brings us. Nevertheless, we work on the basis that Jesus ‘really’ is the powerful, compassionate, saviour. His suffering is just a temporary, necessary, evil. Indeed, philosophers and the culture around us will often use that as the ultimate definition of God: the all- powerful one. We want the essence of God to be power, because we would like, as God’s followers, to have some of that power.

Mark’s Gospel will not allow us this. Jesus’ identity is revealed in his death. If you want to know what God looks like, look at the person dying on a cross. Suffering is integral to who Jesus is, and this is deeply uncomfortable, for we his followers are called to imitate him.

Why not try, in your prayers, worship and thoughts this week, replacing ‘Lord’ or ‘God Almighty’ with ‘crucified one’ or ‘dying friend’ and see how it affects you?

1. Is ‘Almighty’ a good way of describing the God revealed in Jesus?

2. What does it mean to follow a crucified saviour?

3. If you aim to become more Christ-like, do you expect that that means suffering more? (See Col 1.24 and Philippians 3.10).

Crucified one, in fear and trembling I dare to affirm again that I am your follower, even though I know where your obedience took you. Help me to live in the light of the knowledge that your glory was in your death. Amen.