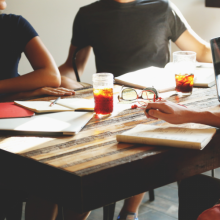 In the book of Acts (ch.2 v.42-47), we are given a glimpse into the church in its very earliest form. Within the framework of gathering, breaking bread, prayer and praise, two verses describe the actions of the first believers as they shared their possessions and gave to anyone in need. This is not given as an added extra, an ideal model of behaviour, but puts social justice right at the heart of the early church and central to worship.

As a priest, I am keen to learn how we integrate social justice into our lives. I’m thankful that I was able to do a secondment with Maun Valley Citizens (in Mansfield & Ashfield, Nottinghamshire), learning the craft of community organising, which brings faith groups, schools, colleges, trade unions and other community groups together to work for change. A core goal of community organising is to generate durable power for the community, allowing it to influence key decision-makers on a range of issues over time. Community organisers work with and develop new local leaders, facilitating coalitions and assisting in the development of campaigns.

From February to May 2016, I worked on the ‘Safety Team’, which continues to work on improving the safety of the A38 road junction near to Ashfield Fire Station and Ashfield School. Every day more than 1000 children cross the road on their way to and from school. Sadly, a member of the congregation from St Mary’s church lost her life at that particular crossing, but we found out through our conversations that two more people needed to die before any improvements can be made!

Two leaders of the Safety Team are members of St Mary’s church, and Sheila in particular is remarkable. She was born in Sutton-in-Ashfield and has lived there all her life, always attending St Mary’s church. She has witnessed Sutton go from being a thriving market town to a deprived and depressed area. She laments the loss of church resources which mean St Mary’s have had to withdraw from their outreach to the large council estate in their parish. However, Sheila has hope that her community can thrive again, and her faith informs her that the church has a duty to share their faith in words and action. Through her involvement with Citizens, Sheila has learned the importance of good relationships within communities, and through a series of one-to-one conversations with community members, local schools and congregants, she has built a substantial team of people who share her concerns about the road.

At the Maun Valley Citizens Accountability Assembly, 12-year- old Phoebe, a pupil from Ashfield school and member of St Mary’s church, gave an exceptional testimony, and the leader of the County Council, Alan Rhodes, agreed to work with Maun Valley Citizens to make the road safer. Since the Accountability Assembly, Sheila has continued to grow in confidence and has contacted Alan Rhodes several times. Not only has the community grown stronger through the one-to-one conversations they’ve held, they’ve also achieved a boost to their confidence as they have succeeded in the first part of their negotiations with the leader of the council.

In my opinion, the church can learn important lessons from community organising. Stronger relationships strengthen a community. If we know one another well, this leads to respect- we understand people, knowing our neighbours and each other’s strengths and weaknesses. At a church in Brinsley with Underwood we asked them to have a 15-minute conversation with someone different after each service in Lent. Each person asked their partner what they loved about our church, and listened to the response. Almost everyone was willing to take part, and we learned something about each other as well as some positive things about the church.

Good meetings are one of the keys to Citizens UK’s success. At meetings, people are encouraged to ask “what do we hope to achieve, and, how will we achieve this?” An agenda is created for every meeting and the meeting itself is carefully timed and rarely runs over, which shows respect for people’s time. Also, action makes things exciting and is the thing which generates energy and change. Listening to one another and chairing good meetings is ultimately no good unless the people see positive change. At St Nic’s in Nottingham City, they have seen a growth in the faith and engagement of church members as they get excited about working towards the common good rooted in Christian tradition and scripture.

Another positive is that people gain in confidence when someone recognises their passions or gifts and allows them to use them. My thirteen-year-old daughter Mia is a keen and committed member of the Safety Team and, when I was unable to make a meeting due to a prior commitment, Mia organised a lift to the meeting so she wouldn't miss out. She has a role in the group and has been involved in various ways in different actions. A thirteenyear-old child is rarely given opportunities to lead, and supported as they learn. Community organising sees the value in every person.

There are some aspects of community organising that are more challenging. The initial conversations are easy enough, but persuading people to commit to being involved and to changing their working practices is more difficult. This is partly down to apathy- a belief that nothing will change anyway so it’s not worth the effort- but also down to leadership. Although work with Citizens does not need to be led by clergy, people often look to the clergy person to lead and to validate new ideas. A failure to engage the clergy person makes it more difficult to engage a congregation.

I firmly believe that a more confident church would be more capable of living up to its potential. I think encouraging clergy and lay people in churches to become involved with community organising can only lead to a growth in both faith and number. As an institution that has relationship at its core, we can certainly learn how to listen to our communities and build strong, healthy relationships. If we have good relationships within our community- if we care about one another and want to see justice for all- building relationships with decision makers can then make us powerful to affect meaningful change.

Anna is a ‘Growing Disciples’ priest in North Nottinghamshire for the Church of England. She did a secondment with Maun Valley Citizens in and around Mansfield, Nottinghamshire.