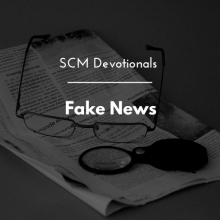 To the Jews who had believed him, Jesus said, “If you hold to my teaching, you are really my disciples. Then you will know the truth, and the truth will set you free.” John 8:31-32

When the winner of the 2017 Nobel Prize for literature, Kazuo Ishiguro, heard of his success from the media, he said he thought it was “fake news”. Evidently a very modest man who couldn’t at first believe it wasn’t a hoax, I’m amused that Ishiguro, the master storyteller, believed the announcement of his great achievement to be a story. He isn’t alone in being suspicious: a BBC poll published in September revealed that 79% of people in 18 countries surveyed worry about what’s fake and what’s true on the internet. Truth appears to be in crisis.

Christianity is profoundly concerned with truth. In John 8, Jesus says that those who truly follow and learn from him will “know the truth, and the truth will make you free.” It seems to me here that Jesus is saying that it is in his loving, self-giving, people-centred way of life and teaching, and in his followers’ entering into that themselves, that truth is found. Truth is not so much something that is said as something that is done, as the Good News of God’s love is enacted, lived and embodied day by day. Fake news or Good News – which does our praxis reveal?

Whatever way you receive your daily news – website, television, radio, print – choose a particular time and make a deliberate and intentional effort to read, watch or listen in the light of the Good News of the love of God for all creation as revealed in Jesus Christ. Consciously allow the Good News to interrogate, interpret and interact with the daily news, and use this as a way to pray for the people, places and situations you encounter. Be aware of the issues that touch or affect you most profoundly. Allow this to lead you to action, however small, in response.