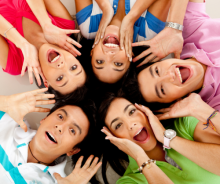 This SCM workshop aims to help us explore our different understandings and experiences of gender within society and the church, and the connections between gender and justice. It’s an introductory workshop which you could follow up with further discussion.

You will need some post it notes or stickers, pens, the gender definition handout (optional), Bibles or copies of the gospel text, and big pieces of paper.

Ask each person to write a name on a post-it note or sticker without anyone else seeing. It can be a famous person, a fictional character, a biblical character or anyone else who is likely to be known by the group.

They should then fix the post-it/sticker to another person – ideally on their forehead (or some other part of the body where they will not be able to see it!). Each person must try to be the first to guess their identity – they can only ask yes/no questions e.g. Am I a famous actor? Am I in the Bible? Am I a woman? There is no need to take turns – it should be an energetic game!

If your group is new to discussing gender issues you may want to start with an exploration of definitions of gender.

Sitting in a circle, ask each person to introduce themselves and say something briefly about their understanding of gender, using these two questions. How do you feel gender relates to your identity? How does gender affect our lives and/or the lives of others that we know?

Next, write the words ‘sex’ and ‘gender’ on a flipchart. Get the group to shout out words that they associate with each term, and write them up.

Here is a definition given by the World Health Organisation. Show it to the group or read it out.

"Sex refers to the biological and physiological characteristics that define men and women. Gender refers to the socially constructed roles, behaviours, activities, and attributes that a given society considers appropriate for men and women. Aspects of sex will not vary substantially between different human societies, while aspects of gender may vary greatly."

What does the group think about the concept of gender being a spectrum rather than an either/or category?

You can make this bit as long or short as you like by the number of statements you use! This is a good activity for bringing out different opinions within the group. It shouldn’t turn into a debate; instead it should create a safe space where we listen to each other’s explanations. Imagine a line down the middle of the room. At one end is the option ‘strongly agree’, and at the other end is the option, ‘strongly disagree’. Read out a statement and ask participants to move to a position on the imaginary line. Once people have moved to their places, ask people in different positions to explain to the whole group why they chose as they did.

Suggested statements are below (feel free to add, subtract, or invent alternatives!)

Men and women are like creatures from different planets, and will never fully understand one another.

Men tend to be more logical and rational then women, whilst women are more relational and nurturing.

Men and women are very similar to one another because of our common humanity. Gender differences are exaggerated by society for political and social reasons.

Christianity and feminism are inherently at odds with one another; it is very difficult to be a Christian feminist.

Men and women are designed by God to have complementary roles in church and society – these roles are different but equal.

Next, read Mark 5: 21 – 34 – story of an unnamed woman who touches Jesus’ cloak and is healed. Discuss these questions in small groups.

What barriers and prejudices would the woman have faced in her society? What do you think about her action and Jesus’ response to her? Who might the ‘unnamed’ woman be in our world today?

The roots of Gender injustice (25 mins) Split into different small groups of 4 – 5. Each group needs a big piece of paper and some pens.

Split into different small groups of 4 – 5. Each group needs a big piece of paper and some pens. Ask each group to:

Draw a tree with roots and branches on your piece of paper. It can be as simple or as pretty as you like – but don’t spend the whole session on it!

Think about and discuss the following questions, using the tree to record your discussions. You may find it difficult to decide whether something is a cause or a consequence, but let the group choose, or put it as both a cause and a consequence.

When groups have got this far, ask them to share some examples with the whole group. (5 mins) Then ask the final question, for small group discussion (10 mins).

You can finish by reading a prayer or meditation. Here is one you could use:

We were created in your image, mysteriously and wonderfully made. You looked on us and said ‘This is good’.

You became human, lived with us in the dirt and joy of everyday life.

Men and women, rich and poor, outcast and powerful got caught up in your stories, your passion you looked on us and said ‘Peace I leave with you’.

You were angry, you cried, you celebrated, you healed, you forgave, you died, you met us in the garden. You looked on us and you knew our name.

We struggle, we follow, we question, we doubt, we celebrate, we divide, we embrace, we fear, we love, You look on us and we hear: