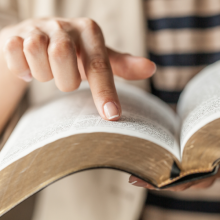 I was raised to read the Bible spiritually. Spiritual readings encouraged believers to find correspondence between the world of the Bible and their own personal piety or spiritual needs. But spiritual interpretation, while personally satisfying, was socially inadequate: we were not encouraged to find connections between the social and political hostility we faced as black people in post-colonial Britain. Consequently, we failed to make connections between the struggles for justice in the Bible and our own concern for racial justice.

One reading strategy or form of interpretation that has been helpful to me in exploring the Bible as a book concerned with justice is ideological interpretation. In order to comprehend the basics of this approach, we will begin by defining ideology and then exploring how its negative use can be utilised in interpreting the Bible.

Essentially, ideology refers to a system of ideas. Ideas never sit alone, but are often related to other ideas. For example, antiracism as a body of ideas is related to humanitarian ideas such as the right to live in peace without fear of brutality. When we talk about ideology as a system of ideas, we are interested in how these ideas are formed (where did they came from?), challenged (is there another way of understanding this?), reproduced (how they are passed on?) and transformed (how are they changed?)

Systems of ideas can be understood in two ways. These may be either the neutral or the pejorative. The neutral understanding refers to ideology as a ‘system of thought’ that forms part of everyday life. Here, the task of the one analysing ideology is to discover the systems of thoughts or beliefs operative within a given context. For example, the neutral deployment of ideology would examine the policies and ideas of George Bush as a branch of contemporary political conservativism. Similarly, the business practices of the international restaurant chain McDonald’s would be examined as a form of global capitalism. In short the ideologically neutral approach identifies the ‘isms’ at work in a particular system of ideas.

In contrast, the pejorative (negative) meaning of ideology is concerned with the relationship between meaning and power, in particular how ideas preserve and sustain power relationships between people. It has been suggested that the pejorative interpretation is ‘meaning in the service of power.’ From this perspective the policies and practices of George Bush would be explored not just as being conservative but through the lenses of ‘conservative evangelicalism’ – his particular view of the world. Likewise the McDonald’s business chain would be analysed as either a form of global salvation or cultural imperialism ‘fronting’ as globalisation, depending on one’s politics!

Naturally, oppression is complex, and the powerful and powerless are not mutually exclusive categories. Therefore, who really wins and loses from a particular reading is not always easy to ascertain.

Ideological critics believe that every reader approaches the Bible from a particular standpoint. Hence, the reader never engages with the text as a ‘neutral’ or unbiased reading. For instance, during Apartheid in South Africa, both the whites and blacks claimed the Exodus story as their own. For the whites the Exodus narrative was a foreshadowing of their ancestors’ journey out of persecution in Europe and into the promised land of Southern Africa. For blacks it was a paradigm (model) of how God was going to set them free from the political and economic bondage of Apartheid. Given the dangers of bias, ideological approaches to the text require a high degree of self-awareness, and also sensitivity towards the bias within the Biblical text and the context of the reader. Greater awareness forms part of the checks and balances of reading a passage of scripture ideologically.

How is ideological interpretation achieved? I want to outline three aspects of this approach.

The first aspect requires a particular orientation towards the scriptures. We need to be suspicious in the best sense of the word. This means that we approach a biblical passage believing that there are hidden power-dynamics at work within the text that we need to decode. To find the hidden power dynamics the reader has to ‘read against the text’, that is to consider who gains and who loses from the way the passage is presented and understood. For example, for some time, feminist theologians have suggested that this is the best way of addressing male bias within the world of the Bible.

Suspicion does not mean that we are cynical. Instead we commit ourselves to engaging in another level of interpretation that is not made obvious through a casual reading of the Bible. For instance, when we re-read the life of Jesus we focus on the power-dynamics at work in his actions and message. Who does Jesus empower, who does he push to the margins? Black theologians argue that Jesus’ central ideology is that of liberation. Put simply, Jesus aims to empower the ‘little people’ of his day, the infirm, morally corrupt and ethnically problematic – for instance, the Samaritans.

The second aspect requires us to identify and challenge what we deem to be problematic ideologies at work in scripture. That is to say, we need to be aware of the ways in which passages can be interpreted so as to maintain in the present context any unjust power relations evident in the text itself! There are glaringly obvious examples of this second concern in the warped ethnography of Genesis 9 and the alleged theological justification given for the genocide of the people of Canaan in the conquest narratives of Joshua.

Seeking out ideologies of power is often the most difficult area for traditionalists to venture into. This is because the ideologies suggest that the Bible is not unproblematic, as it contains other conflicting or questionable ideas.

The third aspect is to explore how contemporary ideologies have impacted on Christian interpretive practices. For example, my own analysis would suggest that the limited prophetic activity of Black urban churches is in part due to the continuing hold of white missionary and colonial theology used to keep colonial subjects in check. Likewise, feminist theologians encourage Bible readers to make connections between the subordination of women in churches today and the history of reading patriarchy or male domination into the Bible.

In short, ideological analysis demands that readers are honest and identify the ideological forces impacting their own lives so as not to read them unconsciously into the Bible. Interpretation is understood as a power-play, a way of ensuring that we do not interpret so as to maintain unjust relationships in the present.

In summary, ideological criticism enables us to look at the Bible and Christian tradition in a new way – looking at the power dynamics today that are the result of unchecked bias in the interpretive process.

Robert Beckford is Professor of Theology and Culture in the African Diaspora at Canterbury Christ Church University.