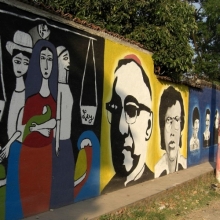 When was the last time you did an act of solidarity with the poor? What do you do with your time and resources and does it help liberate yourself and others from oppressions such as racism, poverty and sexism? Do you reflect on issues of power and wealth in the light of scripture and the teachings of Jesus?

Liberation Theology burst into the world in the 1970s and 80s. It was seen as an outpouring of the Holy Spirit, and was made visible through the struggles of poor communities in some of the most deprived parts of the world. In Latin America priests and lay people were killed in their tens of thousands for advocating an ‘option for the poor’. The death of Archbishop Oscar Romero in El Salvador in 1980 brought these struggles into the homes of North America and Europe. In the context of Apartheid in South Africa, Priests such as Desmond Tutu used Liberation Theology to help articulate the way people of faith must struggle for freedom.

Liberation theology is rooted in scripture that states that Christ has come “to preach good news to the poor...proclaim freedom for the prisoners...release the oppressed...proclaim the year of Jubilee” (or release from debts) from Luke 4 v 18-19. It looks at how Jesus is born into the world on the margins of society, and discovers that though his ministry he sought to support those also on the margins. It recognises that he was brought up on the knee of a Jewish peasant woman who sang songs such as “God has brought down rulers from their thrones and has lifted up the humble” (Luke 1 v 52). For Liberation theologians, the killing of Jesus by powerful political elites was overturned by the resurrection - this is the proof that God was on the side of the victims of oppression. In Liberation Theology, Jesus’ teachings and way of discipleship encourages us to live out non-violent resistance to injustices and gives us new ways of living in community which herald ‘The Kingdom of God’.

In the 20th Century, the work of the civil rights movement, embodied by people such as Rosa Parks and Martin Luther King, began the process of developing a theology actively linked to issues of freedom and liberation. The experience of the poor in parts of Asia, Africa and Latin America forced Christians to reevaluate many aspects of traditional Western theology. Most of the debates within the Church seemed irrelevant in the wake of crushing poverty and hunger, as well as unjust political systems that stifled democracy and murdered opponents. Especially in Latin America, theologians such as Gustavo Gutierrez (Peru), Leonardo Boff (Brazil), Jose Segundo (Uruguay), Elsa Tamez (Costa Rica), articulated scriptural and philosophical issues raised in ‘Base Ecclesial Communities’ and developed a form of Church that proved relevant to the experience of the people.

By understanding the economic and political contexts of people’s struggles, Liberation Theology birthed ‘liberated theologies’ that responded to the real life situation of people, often groups previously marginalised and silenced. Feminist, Black, Dalit (India), Minjung (Korea), Womanist (Black women) Disabled, and LGBT theologies are all related to Liberation Theology. Within the UK, Liberation Theology has been associated with urban poverty, peace movements, human rights and development organisations, alongside those both within and outside the church who are resisting capitalist austerity programs and various forms of oppression.

Liberation Theology ultimately demands us to answer the difficult questions: In the face of global poverty, massive inequality and environmental destruction, how does our theology help build up God’s vision of a better world? If it doesn’t liberate, is it really theology?

Written by Revd Chris Howson. Chris is a chaplain at the University of Sunderland and author of A Just Church: 21st Century Liberation Theology in Action.