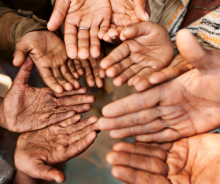 Liberation theology is a term that not everyone will be familiar with, so it's important to gauge people’s first impressions of the topic and their existing knowledge. Begin the workshop by asking everyone to share their name (if appropriate) and in a few words what comes to mind when they think of liberation theology or liberation itself more generally.

You might then like to use some of these questions to encourage conversation. Is liberation a Christian concern? What does liberation mean for Christians: is it related to spiritual and physical emancipation? Does anyone know anything of origins and character of liberation theology? How important is experience as the motor that drives our faith?

Liberation theology arose among poor communities in South America in the 1960s and 1970s. Its historical roots are primarily associated with the work of Gustavo Gutiérrez, a Peruvian theologian who coined the well-known phrase God’s preferential option for the poor.

Primarily, Liberation Theology aims to bring Christianity back to its roots as a religion based in the experience of poor and disenfranchised people. As a theology, it is rooted in ordinary people’s everyday experiences of oppression and injustice, realities of prime importance as the first steps of all theological reflection. If Christianity is to be meaningful, then it mustn't be abstracted from ordinary life. This reflection, firmly attached to real life, provides the basis for tangible expressions of faith which effectively liberate the oppressed.

For this part of the workshop, you might like to read the following quotes and reflect on the following questions. Is the God of the Christian faith concerned with the liberation of the oppressed? What do we think of the idea that theology must involve contextual exegesis and action-oriented faith? How does this contrast with highly intellectual approaches to God detached from real life?

“The God whom we know in the Bible is a liberating God, a God who destroys myths and alienations, a God who intervenes in history in order to break down the structures of injustice and who raises up prophets in order to point out the way of justice and mercy. He is the God who liberates slaves, who causes empires to fall and raises up the oppressed.”

Manifesto of the Bolivian Methodist Church

“The liberation of our continent means more than overcoming economic, social, and political dependence. It means, in a deeper sense, to see the becoming of mankind as a process of the emancipation of man in history. It is to see man in search of a qualitatively different society in which he will be free from all servitude, in which he will be the artisan of his own destiny.”

Gustavo Gutiérrez, A Theology of Liberation

Ask each pair to briefly feedback on their discussions. Next it is important to consider how Christians can pursue this Kingdom. Use the following reflections to engage your group in discussion. To live in the Kingdom of God is to witness the reality of Kingdom values. But is it possible for Christians to take care of the poor and the sick without getting involved in politics? There are many things that we can do outside of government, but is it the case that some forms of sin and oppression can only be tackled at a national level? Jesus not only proclaimed the Kingdom, but he also lived it: is politics a practical way of realising Kingdom values?

This next part of the workshop will explore what the Bible has to say about issues of oppression, in particular what the Bible tells us about poverty and wealth. When Jesus speaks of money and wealth, he almost always speaks of it negatively. Jesus sees it as idolatrous: as an obstacle to God’s wider redemptive purpose.

Time and time again, Jesus makes it clear that redistribution of wealth to the poor is to be viewed as a sign of one’s participation in the Kingdom of God. This disdain for material wealth is particularly true when the wealth is obtained in a dishonest manner, at the expense or harm of the marginalised. All of this is to say that Jesus ushered in a new way of understanding the plight of the other, one which dismantles systems of domination, exclusion, and oppression, and exhibits compassion and care for the lowly.

Read the following verses and reflect on the following questions. Does Jesus advocate redistribution of one’s material possessions? How would you summarise his teaching on the poor and the oppressed? What place do the poor and oppressed take in the Kingdom of God, are they of central importance? Can humanity’s actions play a role in the realisation of this hope? Do you think this message has political and economic implications?

“Jesus said to him, “If you wish to be perfect, go, sell your possessions, and give the money to the poor, and you will have treasure in heaven; then come, follow me.” - Matthew 19:21

“The Spirit of the Lord is upon me, because he has anointed me to bring good news to the poor. He has sent me to proclaim release to the captive and recovery of sight to the blind, to let the oppressed go free, to proclaim the year of the Lord’s favour.” - Luke 4:18-19

“Religion that is pure and undefiled before God, the Father, is this: to care for orphans and widows in their distress.” - James 1:27

Since the time of Gutiérrez, liberation theology, as a method, has grown to encompass and challenge many other examples of disenfranchisement and oppression. These related methodological approaches, like liberation theology in its primary form, attempt to interpret issues of gender, race, various other kinds of contextual issues, through the paradigm of liberation.

These Christian movements are an attempt to challenge the complex realities of global injustices and to remind the Church of God’s original and ongoing concern for justice. Read the following extracts relating to Black Theology and Queer Theology and reflect on the following questions. Does the liberation provided by Jesus extend to issues or race and sexuality? Can you think of other examples of oppression where a theology of liberation might be useful? What would preferential treatment for queer people and victims of racism look like?

“Black Theology is a theology of liberation. It seeks to plumb the black condition in the light of God’s revelation in Jesus Christ, so that the black community can see that the gospel is commensurate with the achievement of black humanity. Black Theology is a theology of ‘blackness’. It is the affirmation of black humanity that emancipates black people from white racism, thus providing authentic freedom for both white and black people.” James H. Cone

“Now that we have remembered the drama of the people of Israel coming out of Egypt, the phrase "coming out" means something new. In the exodus, as in our lives, it means moving out of a situation of bondage—the bonds in our case being secrecy and silence—into freedom. Israel had to come physically out of Egypt in order to worship God and not the idols of Egypt and also had to come out of the way of thinking that makes it possible for slaves to remain slaves: the habits that make idols seem like gods.” Richard Cleaver

Part of being a Christian is wrestling with the practical implications of our faith. Proponents of liberation theology often use the see-judge-act method of faith reflection to discern a course of action regarding social problems. The first stage of the method, seeing, involves observing and recognising the existence of concrete situations of injustice. The second stage involves judgement: judging how a situation has come to be and what factors contribute to its legitimation. What should the situation look like? What structural factors of injustice must be dismantled in order to bring about liberation? The final stage of the method is acting: implementing these principles to bring about change. This final stage is a demand for concrete action to transform unfair social structures. For the final part of the workshop ask your group to split off into groups of twos or threes and use the see-judge-act. What situations of injustice can you identify? What can be done about them? After some time ask the individual groups to feedback to the group.

Close the session by praying for Christians who are actively answering the call to fight against oppression. You might also like to reflect on your see-judge-act conversations. You could ask someone to pray, or here is a short prayer you could read.

Our Father and Mother

who is in us here on earth,

holy is your name

which is a generous land

flowing with milk and honey.

Let us do your will,

standing up when all are sitting down,

and raising our voice

when all are silent.

You are giving us our daily bread

in the song of the bird and the miracle of the corn.

for keeping silent in the face of injustice,

and for burying our dreams;

for not sharing bread and wine,

love and the land,

Don't let us fall into the temptation

of shutting the door through fear,

of resigning ourselves to hunger and injustice,

of taking up the same arms as the enemy.

But deliver us from evil.

Give us the perseverance and the solidarity

to look for love,

even if the path has not yet been trodden,

even if we fail;

so we shall have known your Kingdom

which is being built forever and ever.