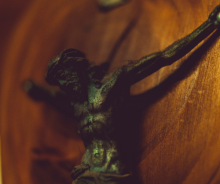 The term prophet is used by in various religious and non-religious ways, with meaning largely dependent on context. Some people use it in the sense of foretelling the future, others use it to describe an interpreter of God’s will. As you start the workshop, it might be good to reflect on the topic at hand and gage people’s preliminary ideas. Ask each person in the group to share the first thing that comes to their mind when they think of a prophet or prophecy. Have these ideas been influenced by their faith, by people they know, by the media and cinema? It might be worth reassuring your group that there are no right or wrong answers.

In the Old Testament, the word used for prophet is usually nabi, meaning spokesperson; someone who speaks on behalf of another. In this sense, the prophets were people through whom God communicated with humankind. In the New Testament, prophets continue to speak in the authority of God. All four Gospels, for example, tell us that John the Baptist was a prophet. Clearly receiving and relaying the word of God is an important element of prophet-hood, but what other acts are associated with prophets and prophecy? Hand out the following short verses and ask your group to brainstorm additional definitions for prophet-hood and prophecy. The ideas don’t need to be related to the verses.

They encourage: “On the other hand, those who prophesy speak to other people for their upbuilding and encouragement and consolation.” - 1 Cor 14:3-4

They pray diligently: “O Jerusalem, I have posted watchmen on your walls; they will pray day and night, continually. Take no rest, all you who pray to the LORD.” Isaiah 62:6

They watch over their siblings in Christ: “Son of man, I have made you a watchman for the people of Israel; so hear the word I speak and give them warning from me.” Ezekiel 33:7

This part of the workshop will examine the ways in which Jesus is described in the New Testament, and the continuation of the prophetic office today. Jesus is given many titles in the New Testament, including the title of prophet (Luke 24:19-20). Many of Jesus’ miracles and signs are prophetic motifs, signs that heighten and realise the motif of revelation, the apprehension of which constitutes new life. People are brought salvation and liberation as a result of the prophetic word that Jesus has spoken to them (John 15:3).

This salvific initiative for human beings not only a spiritual reality to come, it involves the realisation of liberation and justice in our current situations. Ask your group to think about Jesus in relation to the role of a prophet. Did he build up those around him? Did he bring great moral and religious truths? Did he receive anointing and commissioning from God? Did he bring, or did he embody, a message of good news? What was this message of good news? Who was this message of salvation and liberation preferentially for?

Jesus’ prophetic ministry brought a message of liberation which entailed eliminating distress, poverty, domination, and enslavement. The next part of the workshop will explore the role of modern-day prophets. Prophets are not limited to the period of the Old Testament. We read of prophets in the New Testament church, and many figures since have either claimed to be or have been attributed the designation of prophet. This is a highly controversial topic. Ask the group to discuss the following ideas and questions. Are there modern day prophets? Are there modern day false prophets? What are the characteristics of a biblical prophecy?

After the day of Pentecost, the New Testament records multiple examples of spiritual gifts, including prophecy. In 1 Corinthians, Paul encourages the Church to eagerly pursue the gifts of the Spirit, especially prophecy. Of course, Paul also encourages restraint, and tells us that even having the gift of prophecy we are nothing without love (1 Corinthians 13:2). One of the elements of prophecy mentioned above is the revealing of God’s salvific plan. To be prophetic, in a sense, is to reveal God's word, Jesus, and its divine authority, to others. Read the quote below from Oscar Romero and consider the following questions. What do you think Romero means when he implores people to become prophets? What message do these prophets share? Can you think of any examples of modern-day prophets who prophetically speak the message of Christ into their situations? Examples might include Daniel Berrigan, Dietrich Bonhoeffer, or maybe Martin Luther King Jr?

Part of being a Christian is wrestling with the practical implications of our faith. A prophetic calling on someone’s life is a function of God’s redemption plan, a concrete call to action. Indeed, sometimes this calling comes not to an individual, but to a prophetic servant community. Close the discussion by considering the following questions. What does it mean to be prophetic today? How do you mature your calling? Are there existing situations in which you may be called to be prophetic, both individually and collectively?

Close the session by praying for modern day prophets working against injustice. You might also like to pray for individuals and their callings to prophetic ministry. You could ask someone to pray, or here is a short prayer you could read:

In the silence, in the dark,

Not an individual but a movement.

A movement of social conscience, critical of the status-quo –

comes to imagine, to create, what could be, what should be.

Politically dangerous – because the blessings will be shared,

to a people who show little or no hope – as they become lost,

in the comfort of consumerism,

in the violence of militarism.

These bearers of justice – do not bring glad tidings to all equally.

bring humility – living simply, in touch with the earth,

These prophets interfere, as they come to heal,

Carol Gilbert On Being a Prophet