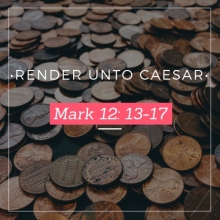 Political life is the structures and customs by which human societies are ordered and the responsibilities which all have by virtue of being part of the community.

Here Jesus is directly caught up in the public life of his time. He is being asked to choose between subservience to imperial Rome and civil disobedience. For both he could be vilified. His subtle response, however, avoided the direct question but set out a principle; one which has been key to how Christians down the years have seen their civic responsibility. It is indeed proper to exercise one’s role as a citizen, acknowledging the necessity of the state for law and order and mutual responsibility; but there is a higher and prior vision and loyalty which is owed to God.

Jesus and the Christians of the New Testament were, of course, living in a very different world from ours. They had to wrestle, as those loyal to the Kingdom of God, how to live faithfully in their context. This could be summarised under four heads:

For us this has to be worked out in terms of the freedoms and responsibilities of a democratic society and a globalised world, from simple acts such as exercising the vote to engagement with local and wider issues through political and civic structures and so forth.

List the ways you are presently engaged in political, community or social action. Is God asking you to reconfirm your commitments or calling you to new or different avenues of action? God   does not demand frenetic activism but a considered use of your gifts and opportunities and a willingness to be venturesome.

Lord Jesus Christ, who has created me and redeemed me, and has brought me to that which I now am, you know what you would do with me; do with me according to your will, for your tender mercies sake. Amen. (King Henry VI).