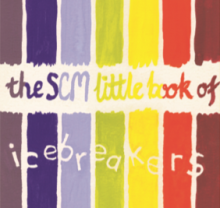 Welcome to the SCM little book of icebreakers!

When we don’t take time to ‘break the ice’ a group activity can feel like a trek through drying cement with strangers, and we want yours to be more akin to a walk in the park with good friends! The games and activities contained in this book are aimed at helping groups to get mixing and laughing together.

Remember that breaking the ice isn’t just about the activity you choose but how it is delivered. The energy and mood of those leading things have a great effect on those taking part. It doesn’t matter if being smiley and bouncy isn’t your thing (and it may not always be appropriate), but don’t be afraid to show a bit of enthusiasm; it’s infectious! That said, the pressure is not all on you; ice breaking isn’t something a leader has to do but something they have to introduce and encourage the group to do themselves.

A great way to start is to provide tea and cake (or other free food) at the beginning of a session and allow a few minutes for people to mingle before they settle. Be especially aware of those who don’t know others and help them feel welcome by making introductions and getting to know them.

May your ice be broken and melt into a river of fun!

This very simple icebreaker is a good quick one to do with large groups.  It works with groups of any size, helps get a sense of the group and introduces names.

You will need: Nothing except people

Instructions: Sit in a circle and ask each person to say their name and answer the same question, this could be naming one nice thing that has happened to them this week or the furthest place they’ve travelled. You can also tailor the questions to have relevance to the workshop or session that follows.

Variation: Another effective way of learning names in a group is a name and mime game. The first person says their name, something they like and a mime that goes with it e.g. ‘My name is John and I like playing the piano’. Everyone else says ‘hello John’ and copies the mime.

If you are feeling cruel you could make it into a memory game. The next person has to introduce John e.g. ‘This is John and he likes playing the piano’ and then introduce themselves. The poor person who has to go last must remember what everyone else has said. Best done in a supportive atmosphere where you help people who get stuck!

This one is guaranteed to raise a smile. Use at the beginning of a session or in the middle if you are changing between activities and want to raise the energy levels of your group.

You will need: A piece of paper for each person in the group Pens (felt tips work best)

Then ask everyone to take the paper off their head, but not show anyone. There will be lots of laughter at this point. You can now get people to write something on their sheet by way of introduction to the session. For example if it was a session on the Bible you could ask people to write their favourite/least favourite Book or if you just wanted people to get to know each other they could put their favourite country or food, or three words that describe them.

Then you all screw up your pieces of paper, have a paper snowball fi ght, pick up a piece of paper and try and return the picture to the owner. Afterwards you can go round and people can read out loud what they wrote on their sheet of paper as a way of introducing the workshop.

This is another simple exercise that needs little preparation.

You will need: Nothing except people

Instructions: This is identical to Name and Question, expect instead of answering a question you give your name and then finish a sentence. You can go round a few times with this one, offering different sentences to finish.

Some examples: If money wasn’t an object I’d… I think my best quality is… The best piece of advice I’ve been given is… If you want to you can tailor the sentences to the theme of the workshop or session.

Variation: This could also be used to close a session or as a reflective activity.

For example: Something I will take away with me is…… Something I’d like us to explore more is…..

This is a simple game that gets people talking to each other and learning names. It would work well at the beginning of term or whenever you’ve got new people in your group. Works best with a larger group 12+.

You will need: Grids split up into squares each with a different description in. Things like “someone who likes marmite” or “someone who wasn’t born in the UK”

A pen or pencil for each person

Instructions: Tell the group that they need to find someone to match each description and write their name in the box. You can’t use yourself! If there is no-one fitting the description then put ‘no-one’ but the group will check this at the end!

The winner is the first to write names in every box, and to have them checked and verified by the group. You could offer a small prize to the winner – like a bar of chocolate.

This game gets people up, moving and mixing (and hopefully laughing too!) It also helps us see what we have in common with each other.

You will need: Nothing except people.

Instructions: Tell the group that the aim is to get into groups with people who have something in common with them – but they have to do so without talking.

The game leader calls out a category such as “what you had for breakfast” and through miming people have to get into a group with people who had the same as them.

You can link this into the topic of your workshop e.g. if it’s one on vocation ask them to mime what they wanted to be when they were 10 years old.

This is a nice exercise for creating a positive atmosphere in a group and getting to know each other better.

You will need: Nothing except people.

Instructions: Simply sit in a circle and go around, each sharing one thing you are thankful for.

This is a great one to get people sharing their outlooks a bit more deeply, so groups who know each other well might like this, but it can also introduce strangers to each other in a thoughtful way.

You will need: A set of images printed out, at least one for each person in the group. You might want to match your pictures to the theme of your workshop or meeting e.g. if it is on the environment you could have images ranging from rainforests to cityscapes.

Newspapers and magazines are good sources.

Instructions: Lay out the set of images on the floor and let people walk around and look at the images. Give yourself enough time so that this isn’t rushed.

Ask each person to choose an image that appeals to them and then share why they have chosen that one. You can share in pairs, small groups or with the whole group depending on how much time you have and what feels right.

This is another good one to get everyone up and moving while they learn about each other.

You will need: Nothing except space for people to move around

Instructions: Indicate where North, East, South & West are in your room (you don’t have to be accurate!) and ask participants to stand to indicate where they consider home, creating a human map. You can chose whether to allow talking or not at this point.

Variation: You can extend the activity by asking people to create a human map to show the furthest place they’ve travelled to, or somewhere in the world that they feel a connection with.

This ice-breaker is good for getting to know each other and also allowing every member of the group to have a chance to speak right at the beginning of the workshop. Deciding what is true or false can also help foster interaction within the group.

You will need: Nothing except people, prize (optional).

Instructions: Ask each person in turn to relate one good thing, and one bad thing that has happened to them recently or in the past (preferably nothing too personal or too serious). One of these should be true and the other one false. The rest of the group has to guess which statement is true and which is false. Consider prizes for those who make the most correct guesses, or for the best liars.

Variation: Ask each person to share three statements about themselves (one of which is false). The group have to decide which is false.

e.g. I can do a cartwheel, I like marmite, I speak French

For anyone who loved ‘fruit salad’ in drama class, this is a bit like that but you get to know people too, hoorah!

You will need: As many chairs as there are people (minus one).

Instructions: Make a circle of chairs, with one less chair than there are people.

One person stands in the middle (the person leading this activity should probably go first) and this person says “go if…” and ends the sentence with something about themselves. So a boring example is “go if…you have brown hair” and a more interesting one would be “go if…you volunteer in your community” or “go if…you like eating peanut butter off a spoon”.

Then all the people who have that in common with the person in the middle have to swap seats, hopefully leaving someone else in the middle. Repeat this as many times as you like. The more silly and random the facts about yourselves the better!

This game is great way to explore different issues and get everyone in the group involved and giving opinions, including those who prefer not to talk much. It’s called the sheep game because people like to herd together!

You will need: A list of statements and space for people to move around.

Instructions: Tell the group that one end of the room is ‘strongly disagree’ and the other ‘strongly agree’ and ‘don’t mind’ is in the middle. Read out a statement and ask participants to stand wherever on the spectrum their opinion lies. Usually there is quite a variation (sometimes a polarisation!) of views.

Ask people standing at different points to explain why they chose that position. This offers everyone a chance to hear different views; they may even want to move further up or down the spectrum!

Variation: If you haven’t got a big space to move around or you want people to work together – print different statements on to paper or card and ask small groups to rank them according to ones they agree with most and ones they disagree with, with ones they feel neutral about in the middle.

The SCM little book of icebreakers is part of SCM’s Group Resource Pack (2011). With thanks to members, groups and staff who have contributed material to this booklet, and to the Pollock Trust for their grant towards the Group Resource Pack project. A large print version of this booklet is available on request from the SCM office.