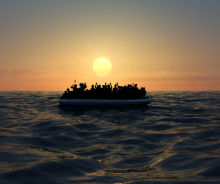 This icebreaker activity will explore what people already know about the global displacement of people. Begin by reading a question below and asking your group to give an approximate answer. After each question, ask the group if the numbers surprise them and why. Let your group know that this activity is not meant to test them, but rather, encourage discussion. You might also like to warn them that this activity, and the rest of the workshop, involves discussion of sensitive issues.

Question: At present, how many individuals have been forcibly displaced by persecution, conflict, violence?  Answer: 65.6 million individuals.

Question: What percentage of refugees are under 18?  Answer: Around 51%.

(TW: This question includes death): Question: In 2017 how many displaced individuals lost their lives in the process of migration towards an international destination?  Answer: 3855.

To begin with, it might be worth explaining some of the terms that will be used in the workshop. In the UK, an asylum seeker is someone who has left their country of origin to seek protection in another country. A refugee, on the other hand, is someone who has been granted that protection. Both of these contrast to an economic migrant, someone who has moved to another country to work. Refugees and asylum-seekers are not economic migrants. Over the past few years, the media have focused a lot of attention on the “refugee crisis”, a term which describes the sharp rise in the number of people seeking asylum in Europe. As of 2014, 1.8 million refugees have arrived in Europe. Ask the group to consider the following questions. What role do you think the media has played in shaping public attitudes towards refugees and migrants? In your experiences, has this been mostly positive or negative? Some people - including some Christians - have expressed anxieties about refugee intakes: how can we fight against these preconceptions? What reasons and motivations do you think people have for leaving their country of origin to seek refuge in another country? Do you think we have a Christian duty to offer protection to those who are fleeing conflict, persecution, and human rights abuses?

As the above discussion might have shown, the political and media narratives which shape public attitudes towards refugees and migrants often lack nuance. Often, these black and white debates are characterised by a constant strife over who is deserving and who is not. The reality of the situation is that the countries refugees arrive from are Syria, Afghanistan, Iraq, Eritrea and Palestine, all nations with poor human rights records or ongoing conflicts. Further, asylum seekers do not relocate to live a life of luxury and claim benefits. Many asylum seekers worldwide live in poverty and are not able to pay for basics such as food and clothing. Indeed, many refugees and asylum seekers hope to return home if the situation in their home country improves.

If we want to understand why people leave their country to seek asylum, then it's essential to find out more about them and their stories. For the next part of the workshop, print out some refugees' stories and ask your group to read them in smaller pairs or three's.  If you have access to a laptop and speakers, you could show a film clip of an asylum seeker telling their story. Afterwards, ask the smaller groups to reflect on the following questions. Why did the individuals have to flee? What was their experience of the asylum-seeking process? How have the refugees found their new home countries, have people been welcoming?

Sadly, the context in which Christians respond to refugees is often one of misinformation and misplaced hostility. The next part of this workshop will explore what the Bible says about welcoming refugees. In his life, Jesus came to bring good news for the poor and liberation for the oppressed. As the stories above show, refugees and asylum seekers are amongst the most marginalised and powerless, making them a high priority for those who pursue mission through the example of Jesus Christ. Indeed, the book of Matthew tells us that Jesus and his parents were themselves refugees as they had to flee from Israel into Egypt out of fear for their lives. It is therefore central to the Christian faith to defend refugees and asylum seekers.

Ask the group to split off into three's or four's, read the verses below, and consider the following questions. What does it mean to welcome the stranger? What does Jesus mean when he says that those who look after the least of these look after him? Do you think the Christian faith allows us, as some claim, to make exclusions from these requirements on the basis of race or religion? Afterwards ask them to feedback their discussions to the main group.

“He defends the cause of the fatherless and the widow and loves the foreigner residing among you, giving them food and clothing. 19 And you are to love those who are foreigners, for you yourselves were foreigners in Egypt.” Deuteronomy 10:18-19

“The Lord is a refuge for the oppressed, a stronghold in times of trouble.” Psalm 9:9

Part of being a Christian is wrestling with the practical implications of our faith. Consequently, it is important to live out Jesus’ teaching on loving our neighbour, particularly in relation refugees. What does this Biblical response look like? Ask your group to reflect on these questions in groups of 3 or 4. What actions can we take as Christians, personally and collectively, to care for the refugees and asylum seekers in our world today? Should we campaign politically to bring about this change? How can we use the student movement to bring about positive change for refugees?

Close the session by praying for those making perilous journeys to flee from persecution and for the organisations helping refugees around the world. You might also like to pray for the countries in crisis and conflict. You could ask someone to pray, or here is a short prayer you could read:

whose Son became a refugee and had no place to call his own;

look with mercy on those who today are fleeing from danger,

Bless those who work to bring them relief;

inspire generosity and compassion in all our hearts;

your Kingdom of justice and of peace;

through Jesus Christ our Lord.