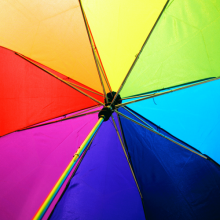 Historical and anthropological studies confirm that what we now refer to as transgender and as intersex people have existed in all ages and societies, including the cultures of ancient Israel and New Testament times. It is extremely likely therefore that Jewish and Christian transgender experience and practice has a long history.

Contemporary queer and trans theologies have highlighted the examples of the apparently cross-dressing Joseph in Genesis, and the only female Old Testament Judge, Deborah, in Judges chapter 4 and 5, both of whom have been dramatised by the performance activist, Peterson Toscano. Trans theologians have explored the theological significance of eunuchs as a ‘third gender’ in ancient societies, particularly in Isaiah Chapter 56, verses 4 and 5, with its prophecy of the inclusion of the eunuchs, and its apparent fulfilment in Philip’s baptism of the Ethiopian eunuch in Acts 8:26-39. Lewis Reay refers to the Ethiopian eunuch as “our most famous transcestor.” He also believes that Jesus’ saying (Matthew 19.11-12) about those who are born eunuchs refers to intersex and trans people. Cross-dressing saints are also cited, while the transcending of gender in the spiritual theology of St Gregory of Nyssa offers a contrasting vision to emphasis on gender fixity in many contemporary Church statements.

The main critique of these vivid correlations between people’s current experience as intersex or transgender Christians, and people of faith in earlier times, is that the biblical authors, and pre-modern theologians, wrote prior to the emergence of modern medical categories and transgender consciousness, and that to seek parallels to contemporary concerns in ancient texts threatens to distort their interpretation and mislead. The debate continues. Meanwhile, such criticism does not prevent trans people from including these texts and figures in their liturgies, or private meditations, or diminish the power and energy that can flow from such identification.

One theory that might favour the link between pre-modern and post-modern gender variance is the changed conceptualisation of gender identified by historian Thomas Laquer. For much of Christian history, a one-sex model of gender prevailed, which stressed the physical similarities of men and women, albeit the female was considered an inferior version of the male. Under this model, a transition from male to female, or female to male, while it could be shameful or hazardous, was at least possible; and in some cultures people who blurred gender boundaries were often associated with the sacred. The two-sex model of gender, on the other hand, which emerged at the Enlightenment, and conceptualises male and female as polar opposites, has inevitably problematised gender variant people, leading to the notion of ‘sex change’.

Despite the longevity of the one-sex theory of gender in Christian thought, modern Christianity appears to have adopted the two-sex theory almost universally, and insists on reading biblical texts in the light of it, with consequences both for the Church’s doctrine of God and for Christian anthropology. As far as gender variant people are concerned, the principal effect has been the conceptualising of their lives as an ethical problem or ‘issue’. This is apparent in Oliver O’Donovan’s Transsexualism and Christian Marriage (2007/1982), the Evangelical Alliance Report Transsexuality (2000), and Chapter 7 of Some issues in human sexuality (2003) which focused on the ‘issues’ of marriage and ordination in relation to what it described as ‘transsexualism’. The Vatican too has made negative pronouncements about transgender people.

Trans or gender variant Christians, such as Victoria Kolokowski, Virginia Reamy- Mollenkott, Helen Savage, Justin Tanis, and others, have begun to build a body of trans theology, but there remains immense disquiet at the churches’ tendency to pronounce about trans people and intersex people rather than engaging with us and hearing our stories. Even a recent collection like Trans/formations (2009), while it included theology by trans people, was still predominantly a collection by our academic supporters.

The Sibyls’ book This is my body: hearing the theology of transgender Christians, which I have co-edited with Michelle O’Brien, was borne of frustration that others were often speaking about us, but without us. It brings together numerous articles and narratives by trans Christian people, as well as allies; our hope is that it will encourage other trans Christians to add their insights to the growing literature of trans theology.

Nevertheless, the work of allies remains important and Susannah Cornwall (2010) and Megan DeFranza (2015) have both demonstrated the dramatic and urgent theological reassessment necessitated by the lives of people who are either sex or gender variant.

The words “intersex” and “intersection” go well together, because intersex is a phenomenon that is intersected by numerous issues. While most intersex people are not trans, intersex people are more likely to express some form of gender variance than people in the general population. Many intersex people are impacted by the same issues as lesbian, gay and bisexual people, and many are simply straight.

Being intersex involves having sexual characteristics from birth that differ from those usually expected for males and females. For over sixty years, this has meant that being intersex has been approached as a medical problem, often seen as requiring surgery and other treatments to “correct” it; more recently, labelling these manifestations of difference as “disorders of sex development”, and the development of pre-natal interventions (as well as foetal de-selection) have become methods to try and eliminate this phenomenon. So, intersex intersects with issues of disability and pathologisation, as well as gender and homophobia. Where intersex people could be assigned as male or female, it has been more usual to find intersex people assigned female; this intersects with issues about gender stereotypes and misogyny.

People who are intersex have existed in all cultures, occur among all “races”, and so being intersex intersects with issues that touch on race and culture as well. In this posting’s context, intersex people can be raised in a Christian culture, so issues of religious faith, spirituality and discrimination can also intersect in such people’s lives.

The Church has no coherent position about intersex people, having tended to ignore that we exist. While keen to pronounce on the practices of those who do not conform to “traditional” understandings about sexual behaviour or gender expression, it has little to say to or about intersex people who, as adults, remain hidden in their childhood medical assignments of 'male' and 'female'. For those of us who do not conform to those assignments, or expected sexual orientation, and who strive to express the sexual variance given at birth, the Church seems to have nothing to say. We are not supposed to exist, least of all openly, yet by doing so, we challenge many of the assumptions of a sexist and homophobic theology that seems to defer to medical authority and the writings of men from centuries ago, rather than our lived experience today.

Tina Beardsley is an Anglican priest and theologian. Together with Michelle O'Brien they co-edited 'This is my body: hearing the theology of transgender Christians'