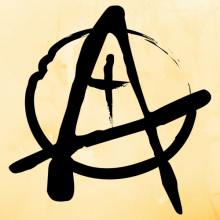 Anarchism is a way of understanding the dynamics of power and how they relate to justice; it is an enlightenment response to an enlightenment problem – the nation state. Anarchism gives greater importance to social organisation than state-promoting theories like democratic liberalism, or Marxism. The literal meaning of the word anarchy is 'without ruler'. Most forms of anarchism emphasise the importance of voluntary association as opposed to imposed nationalism.

A workable model of Christian anarchism must go beyond the selfishness of individualism, thus avoiding Western doctrines of salvation as well as rejecting nihilism. However, it must not fall into the impersonal restrictions of some forms of Collectivism that would oppress the individual. Christian anarchism rejects the violent anti-intellectualism of some forms of anarcho- syndicalism and the violence inherent in the Liberation Theology motif of ‘Exodus’, whilst celebrating non-literate societies as potentially self-governing, regardless of formal education.

Recently, Alexandre Christoyannopoulos made the first published attempt at an outline of Christian anarchism, in his book of the same title. Christoyannopoulos outlines a broad school of thought and, amongst other things, he observes that:

Christian anarchism teases out the revolutionary political implications of Christianity, and in so doing acts as an invitation to reflect, both individually and collectively, on a range of issues of importance today- such as the omnipotence of the modern state, the wisdom of adopting violent means to reach however laudable ends, the usual methods for dealing with criminals in society, for tackling poverty and famine and so on.

Christian anarchism assumes that a hermeneutic (method of interpretation) of nonviolent resistance to violence should be applied to both text and historical narrative to draw out the statist agenda of all protagonists. Christian anarchism challenges the assumption that the powerful, rather than the kingdom of God, is the Christian mode of salvation. It rejects all forms of nationalism, as the kingdom of God transcends temporal modes of belonging.

Dave Andrews, who set up anarchic Christian communities in Delhi and Australia, defines Christian anarchy, or Christi- Anarchy, in a way that has striking parallels with both anarchism and Liberation theology:

A lifestyle that is characterized by the radical, nonviolent, sacrificial compassion of Jesus the Christ. A way of life distinguished by commitment to love and to justice; marginalized and disadvantaged; so as to enable them to realize their potential, as men and women made in the image of God; through self-directed, other-oriented intentional groups and organizations.

Andrews emphasises the community, the intentional group, namely the group who are marginalised and who seek justice. His is a liberationist approach. For Indian theology, the ‘marginalized and disadvantaged’ have been identified as Dalits by Dalits. However, Dalit theology is more introspective than ‘other-oriented,’ focusing on developing self-identity through various means, such as history and literature.

The most substantial commentary on Christian anarchism is that of Jacques Ellul, who defines it most simply as, 'the rejection of violence,' yet he does not reject violence as a means of revolutionary change; rather he rejects it as a means of change for the anarchic Christian, for whom an alternative exists. His extensive study of social mechanisms, and his anarchist biblical criticism of Old and New Testament narratives, provide an alternative to the Liberationist perspectives of Dalit theology. Like many Dalit theologians, Ellul is Christocentric in his approach. Like Andrews, Ellul challenges the role of the coercive state as diametrically opposed to the Kingdom of God: the ‘City’ is contrasted with the ‘garden’, the coercive state with the freed community.

Written by Keith Hebden. Keith is an Anglican priest, author, and activist.